What hurdles do health care practitioners face today as they’re launching their practices? Should they venture out into the potential rewards of a sole practice or seek out security with an established group? What about social media – should they tweet about their expertise? Are they living on peanut butter and jelly sandwiches while they pay off their college loans? How competitive is it to begin a practice as a dentist or doctor these days in Greater Des Moines?

Here’s a look at some of the challenges that three of Central Iowa’s newest practitioners have, from the perspective of a doctor, dentist and chiropractor, each of whom is starting his or her own practice. 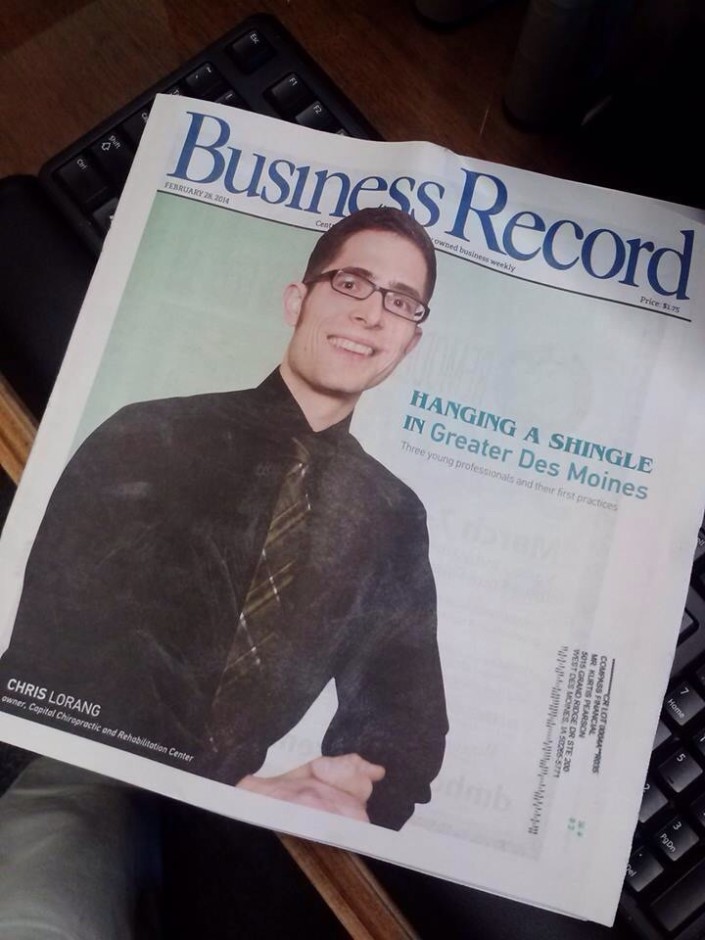 For 28-year-old Dr. Chris LoRang, establishing a new chiropractic practice in Des Moines means building a lot of connections, and that includes using social media. “People will book appointments with me on Facebook,” said LoRang, who opened Capital Chiropractic and Rehabilitation Center in the East Village in July 2013.

For his practice, “the social media realm is almost more important than a website right now,” he said. “People go to that for patient testimonials and to see what sort of interactions those offices have.”

LoRang – whose practice was recently named 2013 Business of the Year by the Des Moines Downtown Chamber – has also gotten his name out into the community by providing free chiropractic services at events such as the IMT Des Moines Marathon and the Hy-Vee Road Race during the Drake Relays.

“With those events, part of it is literally just providing a service to athletes in the community,” he said.

Building a clientele is a challenge, but it’s not the most difficult part of starting a practice, LoRang said.

“I love building a clientele; I love interacting with people both inside the clinic and in the community,” he said, though he noted, “it takes work every day to interact with people and let them know how this place is different, and how we might be able to help them.”

The most difficult task? Getting credentialed with the major insurance companies and mastering their complex claims systems.

“I find that I learn a new (insurance) question to ask every day,” he said. “For a period of time, I thought that was only going to last the first couple of months, but really, it continues on a daily if not hourly basis. It’s a complex system, and there are so many levels even within each institution that you have to navigate. Thankfully, the chiropractic profession has integrated into the health care realm, so many insurance policies cover it.”

Historically, chiropractors have tended to operate independently as solo practices, but that trend has been shifting toward more group practices to share overhead costs, LoRang noted. “I looked at several opportunities (with chiropractic clinics) within Greater Des Moines, but nothing fit my treatment approach at the time I was looking,” he said.

As part of the curriculum at the Palmer College of Chiropractic in Davenport, LoRang was required to write a business plan for his practice. “Even the people who plan to go into practice with someone else still have that project,” he said.

As he researched for his business plan, LoRang compiled best practices from the business plans of chiropractors, and then got a reality check by working with an adviser at the Small Business Development Center. He also got a primer on financial spreadsheets from a program provided by NCMIC Group Inc., a Clive-based malpractice insurance provider.

A mentor has been Dr. Braxton Pulley, a chiropractor who practices a few blocks away in the East Village.

“That relationship has been great,” said LoRang, who first met Pulley five years ago when he lectured at Palmer and later shadowed Pulley at his clinic. “That has made it a very easy transition into this neighborhood.”

Now that he’s several months into his practice, LoRang is looking ahead to the day when he’ll hire his first employee – a part-time receptionist.

“That time, thankfully, is approaching faster than I expected,” he said.

Overall, just being open is a relief after years of preparation and anticipation.

“Oftentimes, I have more work in a day than I can get through in one day, so it’s a constant game of staying one step ahead and then also finishing work from the day before,” LoRang said. “I think it is a relief now that I’m open, now that I have the brick and mortar, I can tell people where they can seek out treatment.”

See the full article on the Business Record website.